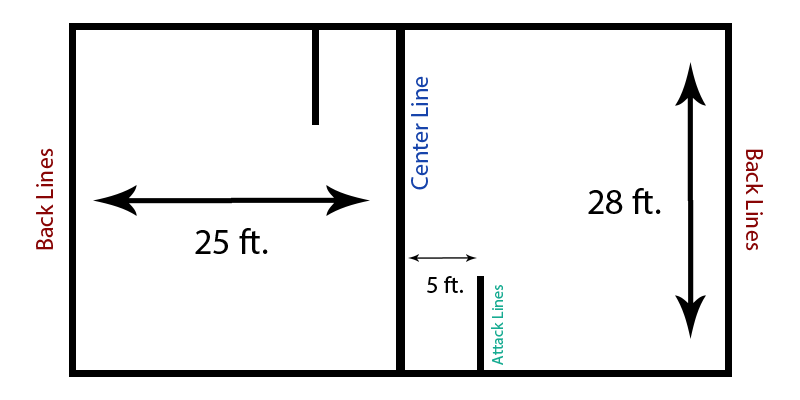 The ten second count is how we keep the game moving. When a team possesses a majority of the balls (or the burden ball in case of a tie), the burden is on them to throw enough balls to drop below that majority within ten seconds. Once that occurs, the count resets.
The team need only throw enough balls to drop below the majority as achieved when the count started. Additional balls collected during the count do not increase the number of required throws during this count. The burden ball decides which team is “burdened” to throw in case of a tie (3 balls on each side).

If the required number of balls or burden ball are not thrown within ten seconds, the ref will stop play and award all of the balls to the other side.

Intentionally throwing a ball out of bounds not towards an opposing player (bouncing off of high ceiling/basketball rims as well) is considered a delay of game. The ref will stop play and award the non-throwing team the ball.

Reffing the 10 second count is hard. We recommend one ref be dedicated to this. Use your arms to denote which side currently has the burden and start the count by declaring how many balls they need to throw. A silent count is fine but when the count gets down to five seconds make sure you’re loud enough for both teams to hear. On a count down, if you are able to begin the word “zero” without the requisite balls being thrown, stop play immediately, redistribute balls, and restart both teams from behind the back line.

There should be a minimum of four referees and a maximum amount of six. One center ref should handle ball count while the other does countdown and is watching for outs, catches, line violations, etc. Both line refs are watching the back/sidelines and are helping that team retrieve rogue balls.

A game may NOT start until there are four refs on the court! Captains MUST ref.

Honour System Officiating: It is ultimately up to the players to enforce and uphold the rules of dodgeball when playing or refereeing. Dodgeball relies on the honour system, in which officiating is determined more between players and less from the referees.

If there is a controversial play, the referees will make the final call. They have the right to stop a game and discuss the incident before proceeding. In respect for the spirit of the game and for fellow players, there is absolutely no protesting allowed. All players (including captains) must grab balls in their possession and step behind the back line of the court while the referees discuss a decision. A referee may ask both captains to join the discussion to make clarifications. The refs will continue play after a decision has been made and players/refs are back in position. However, we encourage players to discuss and clarify any plays in a respectful manner with referees after the game is finished.

Referees reserve the rights to deem that a player is displaying serious unsportsmanlike conduct. In this case, the referee is able to eject a player from the game and that player will have to sit out the following game (even if it’s a different match). The other option is for the referee to inform an organizer of the behavior after the game has concluded and the appropriate action will be taken. Any further violation punishments will be determined by the organizers themselves.

Dead ball
A dead ball is any ball that has:
Dying ball
A ball that has hit a player, but has not yet become dead.
Live ball
A ball that has been activated by checking it past the neutral zone.
Match
A collection of games between two teams.
In
Being eligible to participate in the game on court.
Out
Ineligible to play in the game as a result of being hit, caught, or touching/going past the court’s boundaries.
Opening Rush
When players approach the center line to retrieve the balls at the signal of the referee.
Control
A player has control of a ball when they have it secured in their hands.
Burden to Throw
If a team has three balls with the burden ball or has ball majority (four or more balls) it is their responsibility to make an attack and relinquish the original ball majority or burden ball within 10 seconds.
Volley
A volley is a group throw of multiple balls. All balls arriving at a defending player at the same time are part of the same volley. Any balls that arrive unambiguously early or late to the defender are not a part of the same volley.